It has been a very sunny day here in western Poland, so I knew it was basically the same in Germany (it always is) and that there was a good chance Germany would break its previous solar power output record. So, I’ve been keeping an eye on SMA Solar Technology’s live solar power output tool for the country. 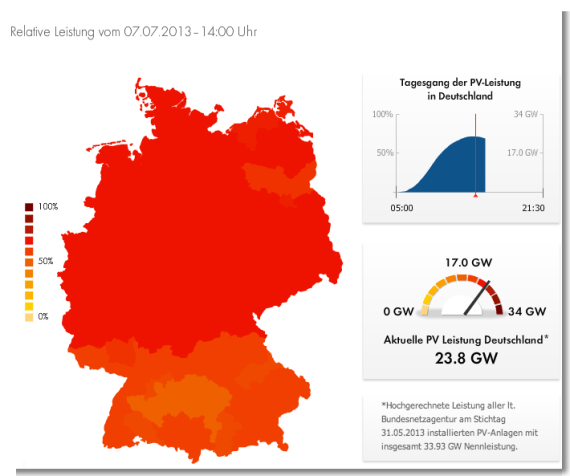 I’m sure an official number still needs to be confirmed, but a full 0.5 GW increase according to SMA’s site makes for a very safe conclusion that we have a new record. It is an estimate based on the output of thousands of SMA solar power systems spread across the country.

As we’ve reported many times before, Germany is the clear solar power world leader at the moment. (Though, Bulgaria and the Czech Republic actually beat it on solar power per GDP). Despite what Fox News or Fox & Friends might want to tell you, it’s not because of Germany’s “excellent” solar resources — its solar resources are comparable to Alaska’s. Rather, it’s because the country has had a simple, strong policy in place (solar feed-in tariffs) to stimulate solar power installations on homes and businesses.

Note from Ed: We checked on the energy transparency web-site, which suggested that at 1pm, when solar was providing 22.4GW, it was providing just over 45 per cent of the electricity, with wind providing 1.2GW, and conventional generation 25.9GW.

See the graph below: