Most of us are somewhere in between these two extremes. Some things we want governments to do. Others we’d prefer to leave to private enterprise – always, however, within a framework of ground- rules set and enforced by government, including what we call ‘regulation’. The theme of this conference is ‘a global industry, competing locally’. To sort out what we want from government, and what we take as the responsibility of industry, let’s examine that theme. What is this ‘global industry’? What does it do, globally? How should it compete, locally?

It has a global presence, major companies active in many countries. They call themselves ‘energy companies’. Are they really? At the moment, their revenue streams arise essentially from selling fuel or electricity. They call that ‘energy’. But I am a lapsed nuclear physicist. I know what ‘energy’ really means. Energy makes the universe go round. When you talk about ‘energy’ you have to talk about whole systems, and what they do.

No one wants ‘energy’. When did you last put ‘energy’ on your shopping list? Until just over forty years ago, no one except scientists and engineers talked about ‘energy’. Politicians, governments and the media talked about ‘fuel and power’ – ‘power’ meaning ‘electricity’. They did so, because of what people wanted to do, and how they wanted to do it. Fuel and electricity were, and are, essential. But they are only part of the system, and not the most important part.

In purely physical terms, we humans want to do six things. We want to control heat flows. We want to adjust local temperatures up or down. We want to make light. We want to exert force. We want to move things – by exerting force, but the activity is so important it deserves a separate category. And we want to manage information – now potentially the most important activity of all.

We do all these activities with whole systems, made up of physical artefacts – buildings, lamps, motors, vehicles, electronics – and using two processes – fire, and electricity. Of the two processes, fire still dominates. Fire predates homo sapiens. Our Neanderthal precursors had fire. We have evolved with fire. We think of fire as cosy, welcoming, hearth and home. But fire is actually a violent, extreme process. Fire produces heat at a temperature so high it’s dangerous. Fire turns resources rapidly into waste. Much of this waste is pernicious, locally or globally. Why can’t you breathe in Beijing? Fire, and what it pours into Beijing air. Why are governments fighting over the Arctic seabed? Fire, the worldwide desire to feed fire. Why are we alarmed about what’s happening to our weather? Fire, and the carbon dioxide it pumps into the atmosphere. We have let fire get out of control.

We don’t need to. We’ve known almost since the earliest days of electricity how to make it without using fire, for instance by harnessing natural forces such as wind, moving water and more recently sunlight. However, we have convinced ourselves that making electricity with fire is less costly than these other methods. Because we evolved with fire, we have never accurately costed its pernicious consequences. Because cost comparisons are wildly inaccurate, our governments continue to allow us to resort preferentially to fire, rather than the many much less damaging forms of electricity not based on fire.

Moreover we have come to treat electricity as though it were fire, with government ground-rules and regulations to match. We buy and sell electricity as though it were a commodity, in short-term batch transactions where what matters is the price per kilowall-hour. But electricity is not a commodity. It is a process, happening instantaneously throughout an entire system – including most particularly the user-technology that does what we want to do – the lamps that make light, the motors that exert force, the electronics that manage information, and so on.

We need urgently to revise our assumptions about the regulation of electricity. We need to recognize explicitly that electricity is not a commodity but a whole-system process in infrastructure. What matters is not short-term trading in some putative ‘electricity market’ but long-term investment in this infrastructure. The most important place for such investment, moreover, is at the point where the system is doing what we want to do – the buildings, lamps, motors, electronics and other user- technology. But we need investment everywhere, to replace traditional generation and networks with the innovative technical options now burgeoning, especially decentralized generation and smart networks.

To foster this investment we need new regulation, new business models and new revenue streams. What we have is outmoded, unable to cope with the transformation now under way. US network operators, for instance, face a mounting threat from decentralized generation that does not pay, or pay enough, for network access. Yet the more you have to pay for the network the keener you are to leave it and install your own generation, as is now happening hectically in Australia. In Germany the feed-in tariff has dramatically altered the balance between local generation, often owned by communities and individuals, and traditional large-scale remote generation owned by the major German companies. The companies are now in trouble, opposing Germany’s ‘Energiewende’ while struggling frantically to adapt. In the UK the government’s so-called ‘electricity market reform’ is effectively reforming it so that it is hardly a market at all, with so-called ‘contracts for differences’ that essentially offer generators fixed electricity prices even out to 35 years from now, in the case of the controversial Hinkley Point C nuclear plant.

Regulatory models are breaking down. We need to reshape electricity regulation and electricity business away from its traditional focus on selling units of electricity, away from short-term commodity trading, back toward the model Thomas Edison originally used. At the outset he charged his customers according to how many lamps they had. The customers were paying to have electric light available, whether they used it or not – just as, for instance, you pay rent for the comfort of a house, whether you are in it or not.

Edison’s customers were paying not for a commodity but for access to the process. Edison in turn had to optimize the entire system – not only the steam engine, generator and cables, but also the lamps – to keep the total cost tolerable. He was selling light – what his customers actually wanted. Optimizing whole systems should once again become the guiding principle of regulation, and the objective of genuine energy policy and energy business.

That time is still some way off. Fortunately, nevertheless, we are already seeing the gradual emergence of innovative regulation and innovative business, in many parts of the world. It is evident, for instance, in the rise of microgrids and integrated optimized local systems serving the immediate neighbourhood, such as universities, hospitals and small communities, both here in the US and much more widely in northern Europe, where local community ownership and operation of entire systems is increasingly widespread.

Traditional centralized systems based on very large, remote generation and very long high-voltage transmission lines are already evolving toward much more decentralized systems, in which loads and generation are closer to each other both in location and size. Decentralization reduces the vulnerability of systems to large-scale failure. It increases their resilience and ability to recover from damage, whether from extreme weather or malevolence, threats unhappily ever more evident.

Not everyone, however, favours these changes. Traditional centralized electricity with generation based on fire still dominates. Powerful adherents in politics and the media defend its role and its advantages. Chief among its advantages is our stubborn failure to cost accurately the pernicious consequences of fire, local and global. Adherents of fire-based electricity therefore claim vehemently that it is the cheapest; and users paying electricity bills tend to agree. Efforts over the years to apportion costs more accurately to fire and fire-based electricity have had at best limited success. Legislation and regulation seem unable to cope.

The most important role for government in energy, therefore, is neither legislation nor regulation. The most important role for government is as a country’s largest energy user. Governments at every level – civic and municipal, state and provincial, federal and national – use fuel and electricity throughout their activities, in buildings, fittings and appliances, in street lighting, in data processing, communications and other electronics, in vehicles of every kind, and of course in the military – the catalogue is endless.

Governments can therefore reshape energy business. As major and desirable clients, governments can make the rules. They can call for tenders for detailed audits of their energy systems, to find and design improvements; to integrate and optimize entire systems throughout their facilities; and to install, operate and maintain the upgraded systems, not merely ad hoc, as happens already, but as strategic programmes with long-term focus. Such programmes will prime the pumps for real ‘energy’ companies, that invest and operate over the whole system. They will create jobs all over the country, mostly where workers already are. Best of all, if managed effectively, they will save us taxpayers money.

Governments can and must also publicize the results, continuously, as an example to private industry, the media and the public of this new approach to energy, energy policy, energy regulation and energy business. City governments such as those of Sydney, Australia and Seoul, South Korea are already doing this. If more joined in we could transform our energy systems within a generation.

As this global industry evolves, with new business models to seize new opportunities, its most important competition will be local, where we do what we do. It will be competing to shift the balance away from fuel toward better user-technology, and investing to minimize waste and maximize efficiency. It will be competing to replace fire and its pernicious consequences with electricity no longer based on fire, harnessing natural forces for us to do everything we want to do. It is going to be disruptive, exciting and scary. Fasten your seatbelts. 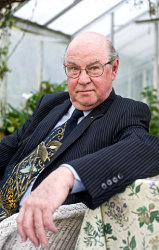 Walt Patterson is an associate fellow in the Energy, Environment and Resources Programme at Chatham House in London, UK, and a visiting fellow at the University of Sussex. His latest book, now in preparation, is Beyond The Fire Age: What We Do, How We Do It, How We Can Do Better. Walt Patterson On Energy is an online archive of his work since 1970.

← Previous
Will 2015 be the year of solar power across Africa?
Next →
Caribbean island says goodbye diesel and hello 100% renewable electricity