California’s cap and trade market will expand in 2014 after a successful first year of operations that quelled fears of a European Union-style carbon allowance glut while powering a clean energy economic boom.

2014’s available allowances and minimum reserve price are both increases over this year, when 57 million available 2013 allowances sold at a minimum reserve price of $10.71. But beyond increasing the number and cost of permits, several other developments suggest California’s carbon market will have an even more successful second year of operation.

Three positive angles stick out from these auction results. First, all available 2013 allowances sold during the auction while nearly two bids were received for every one available allowance, meaning strong demand exists among bidders. While the November auction’s allowance price was the lowest of the four auctions held this year, it was still significantly higher than the minimum reserve.

Second, all future allowances sold out for the second auction in a row, at the highest clearing price yet for future vintage allowances. With demand and prices rising, California’s carbon market also shows strong future interest from bidders and stabilizes the system moving forward.

Third, the carbon allowance auctions continued to plow revenue into the state’s clean energy economy. $1.4 billion in total auction revenue has been raised, with more than $530 million dedicated to cutting emissions or funding renewables, including $130 million for clean energy projects in low-income communities.

Just like with any start-up, California’s cap and trade system experienced a few growing pains in 2013, but two new developments should allay fears of market instability.

To start, California’s Superior Court ruled the system is within its legal authority to use auctions as a mechanism to sell allowances into the market. The decision dismissed a lawsuit by polluters who argued all permits should be distributed for free. While the ruling may be challenged, it does set a reassuring precedent. 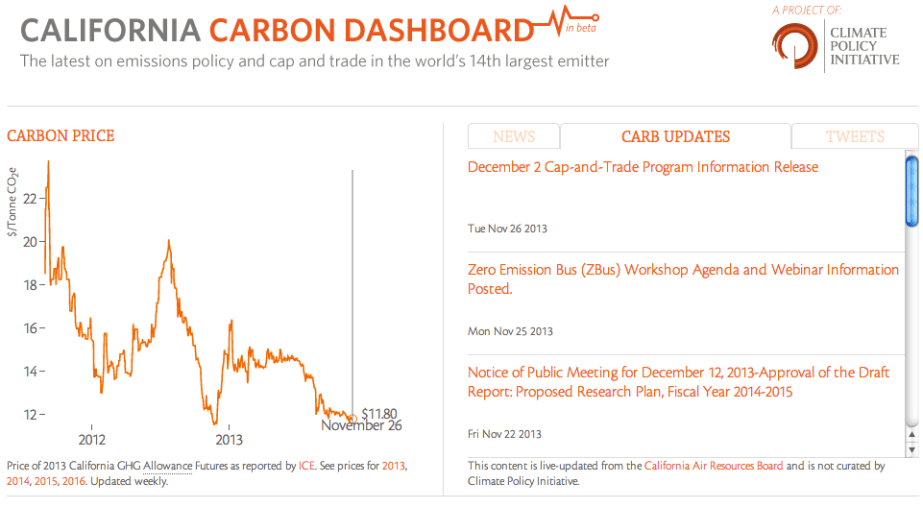 In addition to legal authority, daily system interactions should become much clearer thanks to the California Carbon Dashboard, an online resource created to track carbon prices and system news. The website also aggregates CARB announcements, emissions levels by sector, and system interaction with other state policies to provide market participants the clearest possible picture.

Biggest Impact Could Come Outside California

But California cap and trade’s 2014 fortunes won’t only be made internally. The system’s biggest gains will most likely come through linkages to other global carbon markets, and could ultimately make it the center of the world’s second international cap and trade system.

On January 1, 2014, California will formally link its system with Quebec’s nascent cap and trade system. This move will establish North America’s first international carbon market and allow market participants to trade allowances and offset credits across both jurisdictions. By 2020, the linkage is expected to generate at least $2.5 billion for clean energy in Quebec.

California also recently signed a formal agreement to link its climate policies with British Columbia, Oregon, and Washington. Under the plan, California will maintain its cap and trade system while British Columbia keeps its carbon tax. Together, they’ll link where possible, and coordinate with carbon markets being considered in Oregon and Washington.

The state also now has a formal relationship with China to work together on cutting emissions by designing and implementing synchronized carbon trading systems. China is in the middle of launching seven regional carbon markets that once fully operational, will be the largest in the world.

As international carbon markets start to develop around the world, California’s success is becoming a model for emulation that could transform the state from the epicenter of America’s clean tech market to the centerpiece of the fight against climate change.