Rapid change is sweeping across the energy world: fuels are increasingly encroaching on each other’s territory and the silos of regional markets are breaking down.

For a long time global energy markets were relatively stable, dominated by long-term investment in asset-intensive fuel businesses that rarely competed with one another. Now, rapid change is sweeping across the energy world: fuels are increasingly encroaching on each other’s territory and the silos of regional markets are breaking down, write Christophe Brognaux and Nicholas Ward of The Boston Consulting Group (BCG). As a result, fundamentally different approaches to investment, planning and public policy will be needed.

The recent plunge in crude-oil prices has captured the attention of global markets, but bigger, more profound changes are under way that will fundamentally alter the energy landscape and endure long after prices stabilize.

For much of the past century, global energy markets have remained relatively stable, dominated by asset-intensive businesses with long investment horizons. Energy sources such as oil, natural gas, coal, and electricity rarely competed with one another, even when supply or demand disruptions affected a particular source. For example, the oil price shocks of the 1970s did not spawn a meaningful shift to alternative transportation fuels. In the rare cases in which such shifts did occur, the transition was slow.

As a result, the market structure and competitive landscape for each source of energy has evolved slowly and, in general, independently, mostly driven by consolidation.

The pace of change will vary by industry, but we see the potential for feasible competition among a variety of energy sources across most end-use categories within the next two to three decades

In the past few years, however, this segregated structure has begun to shift. Rapid structural changes are sweeping across global energy markets, creating an increasingly dynamic and unpredictable outlook. These fundamental shifts are producing numerous effects, including greater competition among energy sources within major energy-use categories; increasingly interconnected regional markets; complex scenarios; and an even faster pace of change.

As the global energy landscape becomes transformed, industry participants, investors, and regulators must understand their exposure to a wide variety of potential scenarios, each of which could have significant implications on sources of competitive advantage, capital allocation, and regulation.

During the second half of the past century, there was little substitution among the world’s energy sources for particular end uses, such as transportation and heating. Petroleum products, for example, dominated as a source for transportation fuels and petrochemical feedstock. Centrally generated power was the preferred source for lighting and domestic electricity consumption.

Only in two areas have energy sources competed in any meaningful manner in developed markets: buildings have been heated with oil, gas, and, in some places, electricity, while power generation has primarily relied on coal, uranium, hydro, and, more recently, gas.

In today’s market, however, early signs are emerging of much stronger competition among energy sources across a variety of uses:

Changes like these are playing out across nearly all of the major energy-use categories. (See Exhibit 1.) The pace of change will vary by industry, but we see the potential for feasible competition among a variety of energy sources across most end-use categories within the next two to three decades. Two forces have increased the viability of different energy types and unlocked barriers to competition among sources: regulatory policy changes and technological advances.

For example, governments have heavily subsidized the development of renewable energy, particularly wind and solar power generation. Some energy-consuming nations, especially Japan and Germany, have shifted their energy mix away from nuclear power as a result of the Fukushima nuclear accident. New emission controls on maritime transport may drive a switch from fuel oil to diesel or liquefied natural gas (LNG). And in the U.S., a tightening of the Corporate Average Fuel Economy standards is prompting automakers to consider more hybrids and alternative-fuel vehicles.

On top of this, in many regions, a trend toward lower energy intensity and greater energy efficiency is constraining demand growth in energy markets, which will amplify competition among sources. Energy consumption per capita in the U.S., for example, fell by 13 percent from 2002 to 2012. Improved vehicle fuel economy, better insulation, more efficient appliances, and the replacement of incandescent light bulbs with compact-fluorescent bulbs or light-emitting diodes are all driving reduced energy consumption. Lower overall consumption, in turn, intensifies energy-​source competition. For example, more energy-efficient appliances and lighting further increase the impact of decentralized power on centralized power.

We see strong ongoing momentum in the drivers behind increasing competition—continuing changes in regulation and emerging new, or improved, energy technologies—and consumption patterns continue to evolve. Clearly, energy markets are heading for a substantial shake-up before a new equilibrium emerges.

As the silos of global energy markets break down, interdependencies are developing in two major areas:

Combined, these two factors have established a highly interconnected global marketplace, in which developments in any specific area can have far-reaching implications. This new landscape is already evident in several key markets.

Price shocks, regulatory changes, or technological breakthroughs in any given space will pose a much greater threat now than they used to

Since 2008, for example, cheap shale gas in the U.S. has driven a shift to greater power generation using coal in Europe. Abundant, cheap, domestic gas has gained significant market share in the U.S. power-​generation sector at the expense of coal, resulting in a coal surplus. The excess coal is exported to Europe, where it has supplanted more expensive gas as a fuel for power generation.

Similarly, lower oil prices since mid-2014 will likely drive down demand for gas in the U.S., while increasing its consumption in Europe. The U.S. already is experiencing a slower substitution rate as the case for switching from oil to cheap gas becomes less compelling, resulting in lower expectations for future gas consumption. At the same time, countries in Asia—principally Japan, Korea, and Taiwan—are importing large amounts of LNG. Since the price of LNG in those countries is indexed to that of oil, crude’s decline has lowered LNG prices in the region. When oil prices—and thus Asian LNG prices—were higher, LNG importers in Europe rerouted their cargo to Asia because the price differential was attractive. Falling oil prices have narrowed the LNG price differential, making this option much less attractive. The increased supply and subsequent lower LNG prices in Europe will tend to expand the use of gas in the power generation sector there (albeit from a low base).

Examples such as these are likely to become more common as interconnectivity among energy markets becomes stronger and more complex. Competition among energy sources will potentially be influenced by factors originating from outside the home region or from seemingly unrelated energy types.

As interconnectivity among energy markets grows, so too will the complexity confronting players across the energy value chain. Not only will the pace of change accelerate, but price shocks, regulatory changes, or technological breakthroughs in any given space will pose a much greater threat now than they used to as disruptions ripple across interconnected markets.

To thrive in the new environment, therefore, energy companies, equipment providers, and energy-intensive industries must understand their exposure to—and the potential implications of—developments across multiple energy types and regions.

Consider selecting the cheapest source of household electricity. Deciding between centralized power from the grid or decentralized photovoltaic panels will depend on many factors. The same goes for selecting a car

For major end-use categories, the drivers of substitution among energy types are already complex, and interdependencies among energy markets will add extra layers of uncertainty. Consider selecting the cheapest source of household electricity, for example. Deciding between centralized power from the grid or decentralized photovoltaic panels will depend on local solar irradiation, the orientation of the house roof, the cost of the installed solar panel, local grid costs, and tax incentives. Different combinations of these factors lead to different choices—and winners. (See Exhibit 2.) While some parameters can be forecast reasonably well, others are much more difficult to anticipate and can be affected by what happens in other energy markets, especially grid power. 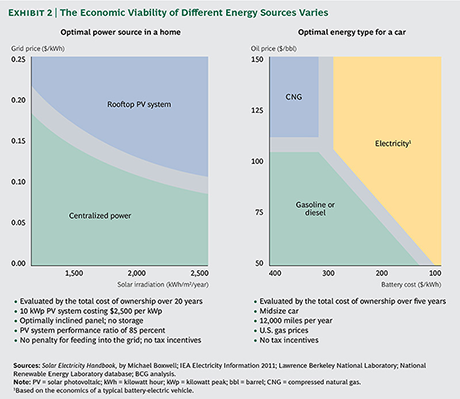 Another example is selecting the lowest-cost car, on the basis of total cost of ownership. The decision is influenced by the prices of oil and gas, the cost of batteries, the total distance driven, and, in some cases, tax incentives. Again, some of these parameters are highly sensitive to developments in other markets. Makers of compressed-natural-gas vehicles, for example, should pay close attention to developments in batteries.

Furthermore, even after the favored energy source (by lowest cost of ownership) emerges, the rate of substitution will depend on many factors. In the case of cars, these include the age of existing vehicles; development of specific infrastructure, such as filling stations; and regulation.

Potential scenarios in interconnected energy markets not only heighten uncertainty but also substantially erode long-term asset values and permanently reshape industries. For instance, in Europe, and to a lesser extent in the U.S., the growth of renewable power is turning many conventional power-generation assets into liabilities.

As a result, energy investors, operators, users, and regulators must prepare for a wide variety of possible scenarios, such as the following:

This changing landscape has far-reaching implications for the competitive positions of various energy sources, for regulatory approaches, and for business models across the power, oil, coal, and gas value chains. They also could trigger sweeping changes for transportation and energy-intensive industries, such as manufacturing. The potential changes are significant enough that they may even alter geopolitical equilibriums.

Adjusting to this uncertain landscape will be challenging. Energy suppliers and intensive users are among the industries that are most in need of strategies to adapt to a rapidly changing operating environment—yet there is little consensus on which potential scenarios are likely to unfold and what their implications might be. Furthermore, these industries’ large fixed assets and long-term investment horizons reduce their potential for an agile response. It is clear that, with such high stakes, the value creation gap between the winners and the losers will be wide.

To cope with the complexity confronting global energy markets, stakeholders across the energy value chain must address several key questions:

The responses to these challenges vary broadly, and neither individual companies nor societies may be adequately prepared for the energy future that is coming. One thing, however, is clear: we need better dialogue about the future of energy markets, tapping into the collective intelligence of not only the energy industry but also society at large.

As the more dynamic, interconnected, global energy market emerges, traditional approaches to investment, capital allocation, planning, and regulation will become increasingly difficult to apply. Fundamentally different approaches to competition, planning, and public policy will be required. All participants will have to understand the potential evolution—and long-range implications—of these new markets.