Concentrating solar power (CSP) could unlock our clean energy future and boost solar from an intermittent contributor to a baseload generator – if we clear the regulatory, technological, and financial hurdles standing in the way.

“Fulfilling the Promise of Concentrating Solar Power,” a new white paper from the Center for American Progress (CAP), estimates CSP could add up to 16 gigawatts of baseload power globally within a few years, with a larger return on investment and smaller environmental impact than most other energy technologies.

Could Concentrating Solar Power Save Humanity?

CSP technology has been called “the technology that will save humanity.” While that may be a grand statement, CSP could meet up to 7% of the world’s projected electricity needs in 2030, and 25% by 2050, according to CAP.

Unlike solar photovoltaic or wind generation, CSP electricity is generated by heat, meaning excess output can be stored for later use and relied upon by grid operators without intermittency concerns. Storing heat energy is also 20 to 100 times more cost-effective than storing electricity in batteries, with energy-conversion efficiencies already exceeding 90%

Much More Than Just An Intermittent Renewable

These attributes mean the 2.5GW of electricity currently generated worldwide by CSP and 2GW under construction can be viewed through the same energy-production lens as fossil fuel generation.

When environmental and economic benefits are added, CSP’s superiority over fossil fuels and other renewables really come into focus. CAP notes that CSP plant components are largely sourced from common materials like steel and glass, unlike solar PV panels, which depend upon rare earths and volatile global supply chains.

CSP also uses less land per MW than any other form of renewable energy, producing 1.5 to 3 times more power per acre than solar PV, and the same amount of land as fossil-fuel generation when mining and production requirements enter the equation.

CSP is also cheaper than coal when considering emissions. A conservative estimate predicts by 2015, sequestering 1 metric ton of carbon dioxide from a coal plan will be three times more expensive than generating the same amount of electricity from CSP. 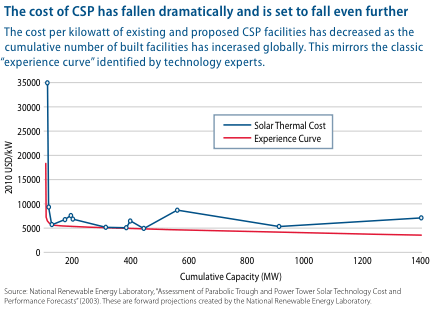 These attributes are already making CSP electricity cheaper than fossil fuels. CAP notes that CSP power in California is as low as 12 cents per kilowatt-hour (kWh) compared to 19 cents per kWh for natural gas, and NREL estimates every 1% of efficiency improvement reduces CSP costs 7% No wonder a 70MW CSP array has been added to an existing Florida natural gas power plant to boost production and environmental performance.

This Is Why We Can’t Have Nice Things

So CSP sounds great, and about to take over our energy system, right? Not exactly, says the white paper. Significant market and regulatory challenges still prevent the technology from reaching full potential, including:

Haven’t I Heard These Before?

The obstacles facing CSP aren’t new; in fact they’re similar to many of the energy problems we face today. What’s different, however, is the presence of multiple realistic solutions. 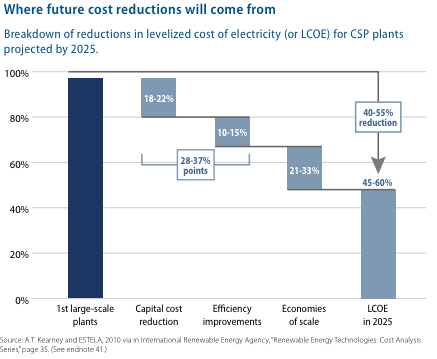 CAP highlights a number of low-cost policy fixes that could boost CSP without major system overhauls, including:

Add it all up, and we’ve identified a proven source of baseload power that could meet a massive portion of our electricity needs, with some of the smallest operational costs and environmental impacts of any energy technology. But, since Congress stands in the way, maybe we shouldn’t hold our breath.