Internet and cable giant Comcast’s Triple Play package bundles television, internet and phone. With the company’s plans to sell electricity, it could soon become a quadruple play in some markets.

Nearly three years ago, Greentech Media reported on a small cooperative utility in the suburbs of Indianapolis that was merging with the local telecom to offer electricity, phone, broadband and home security services through one company now called NineStar Connect.

At the time, it was a very small and local example of a trend emerging in competitive electricity markets: telecom and other consumer-facing companies selling electricity, the way Marks & Spencer does in the U.K.

Now Comcast, the biggest internet and cable company in America, is spreading the model to Pennsylvania.

On a call with reporters to discuss DEFG’s report, Annual Baseline Assessment of Choice in Canada and the United States, Robert Powelson, chairman of the Pennsylvania Public Utility Commission, said that Comcast was teaming up with a retail electric supplier in the state. The electricity offering could be rolled out in the fourth quarter of this year. A representative from Comcast would not provide details, but did confirm “this is something we’re exploring.”

“Now it will be a quadruple play,” said Powelson, talking about cable, internet, phone and electricity all bundled together. In Australia, one utility and telecom have partnered to offer up to seven bundled services.

Comcast already has an energy play as part of its Xfinity home product, which offers home controls for lighting, security and thermostats. It leveragesEcoFactor’s cloud service to fine-tune the thermostat for savings of up to 20 percent on heating and cooling.

The Comcast offering is a big deal for Pennsylvania, which is one of the more competitive states when it comes to retail choice, but still far behind Texas. That too may soon change. 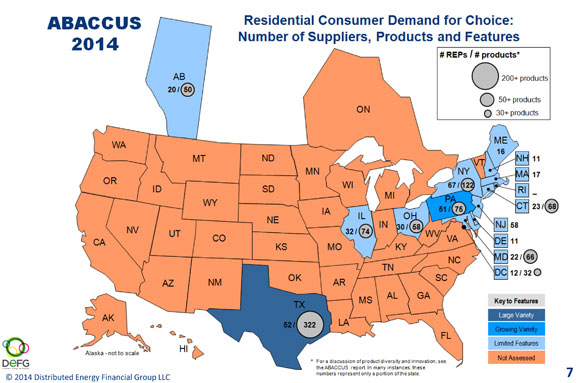 “We’re coming right at Texas,” said Powelson. The state would like retail electricity providers to set up their headquarters in the state, as many have in Texas so far.

To make Pennsylvania as attractive as the Lone Star State, a bill has been introduced to the state senate that would essentially end default service. Part of Texas’ success is that customers must choose a retail supplier when they sign up for service; customers are not defaulted to the incumbent provider.

Pennsylvania Senate Bill 1121 would require customers to choose a new electricity supplier and would give them $50 for doing so. Those who do not switch would be put into an auction, and suppliers would court them for their service. If the bill passes, it would go into effect in June 2015.

“We’re looking at new ways to move the needle on competition,” said Powelson.

Texas has been the leader in the U.S. for retail electricity choice for years. In DEFG’s 2014 report, the state scored a 92 out of 100, with Pennsylvania ranked second with a score of 64. Other states are also seeing an increase in competition. Illinois had more than 3 million customers switch their suppliers last year, up from about 500,000 in 2012.

“This is largely driven by municipal aggregation,” said Illinois Commerce Commissioner Ann McCabe. The trend is expected to continue in 2014. Illinois is one of a handful of states that allow for community choice aggregation, a trend that is gaining steam across the U.S.

Pennsylvania is not one of the states that currently allows community choice aggregation, but that is not what the state is relying on to increase competition. “We’ve studied the Texas model,” said Powelson. By mimicking Texas, Pennsylvania hopes it will soon match that state’s robust retail choice landscape. Texas, meanwhile, is happy to have company.

“We welcome your competition,” Texas Public Utility Commissioner Donna Nelson told Commissioner Powelson on the call. “I am so grateful to see the merging of telecom and electric. I’ve been waiting for this. It makes things exciting.”

← Previous
And now, the sugar battery with unmatched energy density
Next →
Graph of the Day: How AEMO saw rooftop solar in heatwave