If Chancellor Angela Merkel comes to power after elections in September, Germany may become the latest European country to curb support for renewable energy infrastructure. Amidst the poor economic environment in Europe, a number of countries have pulled back support for the renewable energy sector by either reducing subsidies or introducing taxes on revenues from renewable energy projects.

Angela Merkel has promised that she would reduce the $24 billion per year subsidies being provided to renewable energy projects after the September elections as she feels that the sector is now mature enough to support the cost of grid upgrades. 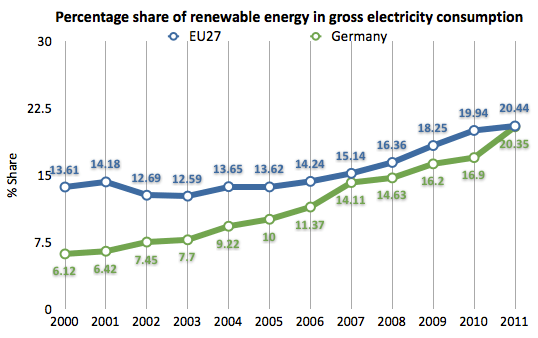 There is no doubt that the renewable energy sector, especially solar photovoltaics, has blossomed tremendously under the liberal and supportive renewable energy policies of Germany. Over the past couple of years, we have had numerous record generation days for the Germany solar power sector. The most recent was on 6 June when solar power met 39% of Germany’s entire peak electricity demand. On 6 June 2013, Germany’s solar power production touched a new high of 23.4 GW surpassing the earlier record of 22.68 GW achieved in April 2013.

Renewable Energy To Strengthen Its Own Future

Germany has announced that it would retire all its nuclear power capacity by 2022, a decision taken after the Fukushima nuclear disaster. Moving to fossil-fuel based power generation, as Japan has down, would be very short-sighted. Japan currently has no international obligations to reduce greenhouse gas emissions, and may not adopt any targets until at least 2020 when the next climate change treaty, the one that would replace the Kyoto Protocol, comes into effect.

Germany has a direct obligation to reduce emissions under the EU Emissions Trading Scheme as well as under the Kyoto Protocol as part of the EU. Moving to fossil-fuel based generation would only undermine the standing of one of EU’s largest and most powerful members as a crusader in the fight against climate change.

By the end of April 2013, Germany had a total solar PV installed capacity of 33.5 GW. The country also witnessed a 20% increase in wind energy capacity in 2012. With renewable energy the only plausible future for Germany’s electricity sector, it seems fair that solar and wind energy sectors contribute to strengthen the power sector.

Other European countries too have decided to reduce subsidies for the renewable energy sector. The Czech government has decided to retroactively levy tax on revenues of solar power projects while Romania plans to reduce the number of green certificates issued to renewable energy projects, thereby reducing the revenue these projects can earn from selling these certificates.