The cost of renewables is steadily catching up to the cost of natural gas in the United States, and will soon beat it.

According to a panel of researchers at the Windpower 2014 conference, continued improvements in wind and solar technologies are making them a threat to natural gas.

Ryan Wiser, a staff scientist at the Lawrence Berkeley National Laboratory, highlighted innovations in blade and rotor design. Advances in materials have allowed the design of longer turbine blades and rotors that can operate efficiently at lower wind speeds. Since 2012, a “massive proliferation” of these turbines has driven average capacity factor increases up by 10 percent at every level of wind resource. As a result of these advances, costs are falling; preliminary data shows that the average 2013 power purchase agreement was at $0.021 per kilowatt-hour.

“These are not your grandfather’s wind turbines,” Wiser said. “They are not even your older brother’s turbines.” 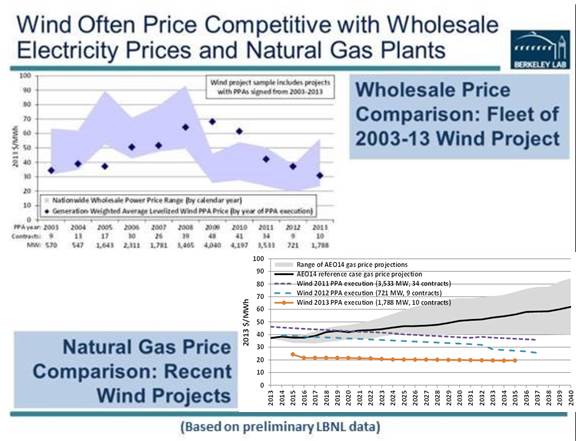 Solar is more complicated because of its wide variety of applications, Wiser said. But both residential and commercial-industrial installed prices continue to drop.

In utility-scale solar, PPA prices are down in some places to slightly more than $0.05 per kilowatt-hour, due in large part to the emerging practice of oversizing the module-to-inverter ratio, according to Wiser. Because this accomplishes the same thing as using a bigger rotor on a wind turbine, the utility-scale solar capacity factor in the desert Southwest is now approaching 30 percent and producing a lower LCOE. 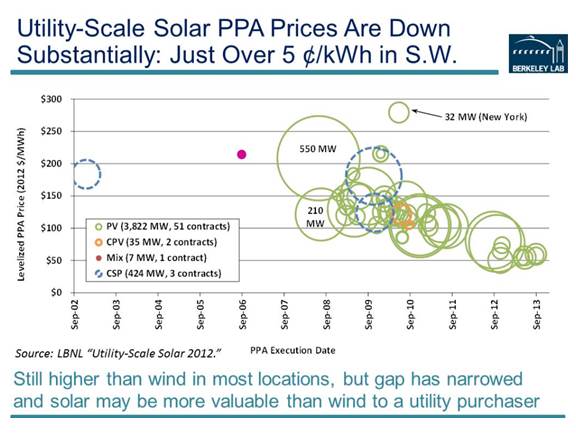 For geothermal and hydroelectric resources, the picture is less clear, according to Eric Lantz, an analyst at the National Renewable Energy Laboratory. The LCOEs for both types of resources have fallen to competitive levels. But both have extended development timelines that create uncertainty for investors. “It shows how LCOE is not the only condition for development,” Lantz said.

“Just like with cars,” Wiser said, “the lowest cost is not necessarily the best buy.”

Other factors to consider include:

To arrive at a determination of LCOE in dollars per kilowatt-hour, one must consider system costs, operations and maintenance costs, financing considerations, and system performance, according to Shalom Goffri, associate director of Navigant Energy.

Even with tax credit concerns, the installed system prices for solar and wind are expected to continue dropping, while the price of natural gas is expected to go beyond $5.00 per MMBtu. “The gap is closing,” Goffri said. Solar and wind should be competitive with at least some natural gas plants “in the near future.”

“People in the natural gas extraction field are aware that a lot of the natural gas being extracted today is at a cost that leaves room to barely break even — and maybe not even [to] break even,” said LBNL’s Wiser.

As the economy rebounds and demand increases, “the supply-demand balance needs to recalibrate at a somewhat higher cost to enable shale gas development to occur on an economically sustainable basis,” he added.

Longer-term uncertainties are quite high because the extent of available gas reserves is unclear, and there are doubts about how it should be extracted, said NREL’s Lantz.

“Even the near term is uncertain because of the spike in price during last winter’s cold weather, and [due to] storage concerns about the coming winter,” he continued. “Those price spikes could occur again and push the price even higher.”

← Previous
The state of Australia: our environment in peril
Next →
Is Europe paying the price for its solar leadership?