The German Energiewende is a heroic but – as it’s conceived now – increasingly disordered effort for unshackling industrial society from the chains of fossil fuels. Due to mistaken assumptions and unrealistic scheduling, it is now confronted with persistent obstacles. The new Merkel government has introduced some changes, but they won’t be enough to sustain the Energiewende, argues independent energy consultant (and renewable energy sympathizer) Jeffrey Michel.

It is one of the greatest national energy projects ever undertaken – and viewed by the German government as an export product: the Energiewende – an attempt by a great industrial nation to do away with fossil fuels and (in this case) nuclear power. At present, however, it is not succeeding: Germany is still relying on fossil fuels, with lignite plants the biggest single contributor to electricity supplies. Recently, Germany’s CO2-emissions reached the high levels that prevailed in the 1990s. 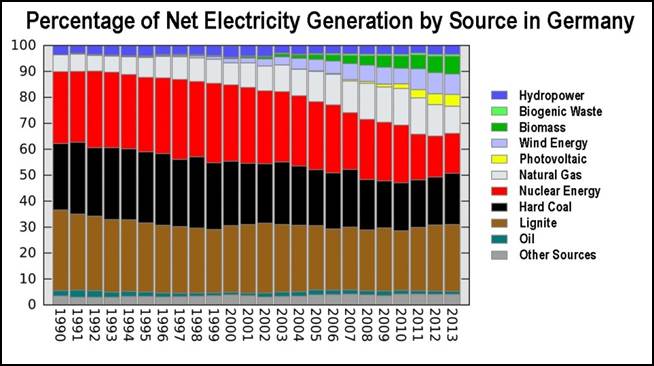 What is more, if the Energiewende is pursued under current policies, coal and lignite usage will persist beyond 2050.

The Energiewende can boast some resounding successes. There are now 1.4 million solar photovoltaic installations in Germany and over 24,000 wind turbines, all of which receive 20 year guaranteed payments for supplying renewable power to the grid. Since the EEG (Erneuerbare-Energien-Gesetz) feed-in law became effective on April 1, 2000, the share of renewable electricity has risen from 5.4% (then chiefly hydropower) to nearly 25%. 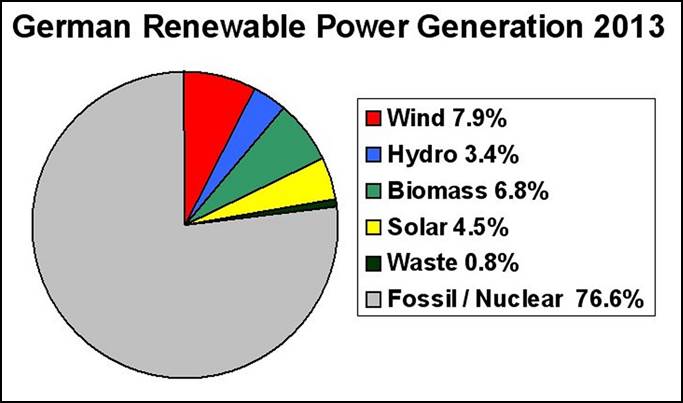 And there is more to come. Enhanced EEG feed-in payments are foreseen for expanding offshore wind power to supersede conventional generation. Installations of 15,000 MW in the North and Baltic seas are considered achievable by 2030, with capacity factors above 50% delivering nearly twice the yield of land-based turbines. By mid-century, renewable generation is targeted to cover 80% of electrical power demand and 60% of overall energy usage.

Yet the Energiewende is encountering serious obstacles. The system of feed-in payments becomes inherently more costly as renewable capacities are added. Sigmar Gabriel, federal minister for economic affairs and energy, has acknowledged that “we have reached the limit of what we can ask of our economy”. Unless the energy transition can be made affordable, “no one in the world will follow us”.

The new Merkel government has now announced reduced feed-in tariffs for new installations in a revised “EEG 2.0” strategy for achieving at least 35% renewable grid supplies by 2020 at only moderate additional cost to customers. Under this plan, average feed-in payments would be reduced from 17 to 12 cents/kWh and for onshore wind power to maximally 9 c/kWh. The former practice of excluding large corporations (even golf courses) from EEG burden sharing is to be restricted to operations exposed to foreign competition. Feed-in payment obligations will also be imposed on efficient on-site generation and use.

None of this means that the government is scaling down its ambitions. On the contrary, CDU/CSU and SPD in their coalition pact of November 27, 2013, agreed to increase the contribution of “renewable energies” (implicitly on the electric power grid) to 40 to 45 percent in the year 2025 and to 55 to 60 percent in the year 2035 – to be realized under consideration of “broad public participation” and “limitation of costs”.

Critics of the Energiewende often object to its alleged “prohibitive cost”, but even though not negligible, this is not the only or main problem. Fossil fuels (including coal mines) have received large subsidies in the past. So has nuclear power. Long term, the price supports provided by the EEG will benefit the common good.

The real problem of the Energiewende is that it cannot succeed in its present form. Originally, nuclear power and carbon capture and storage (CCS) were foreseen to insure grid stability and CO2 target fulfillment during the 40-year transition period. But both of these central pillars of decarbonization have been knocked out from under the system.

In 2000, the SPD/Green federal coalition government reached a nuclear phase-out consensus with the power industry. Ten years later, however, German parliament extended the operating licenses of several nuclear reactors for another quarter century in line with greenhouse gas reduction goals.

But the Japanese Fukushima reactor catastrophe of 2011 soon disqualified nuclear power as a bridge to the renewable energy future in German eyes.. Eight of the country’s 17 nuclear plants were immediately shut down, with the retirement of all remaining reactors scheduled by 2022.

The immediate result of this decision is that fossil fuels will likely dominate grid supplies in Germany until after 2030, as can be seen in the graph below. 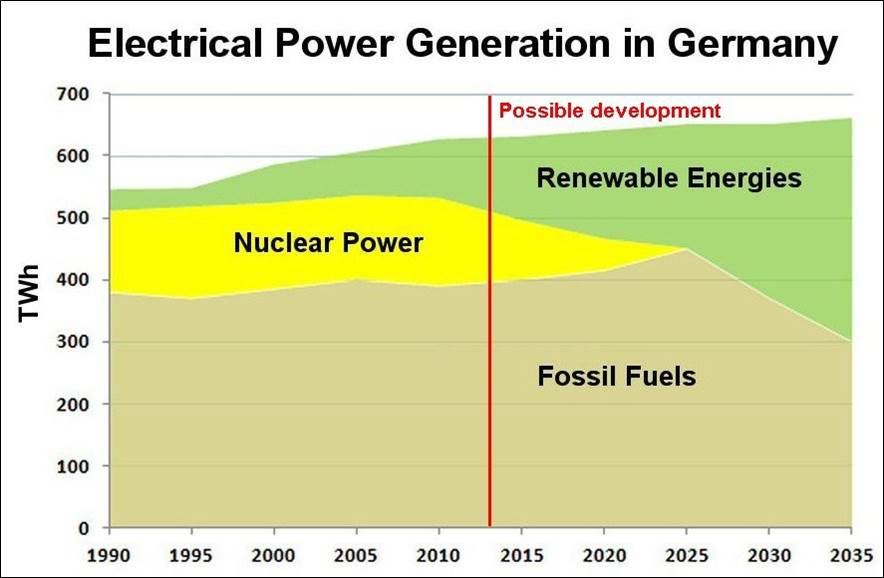 Note that by contrast, the EU as a whole strongly relies on nuclear energy for reducing CO2 emissions in the electrical power sector. 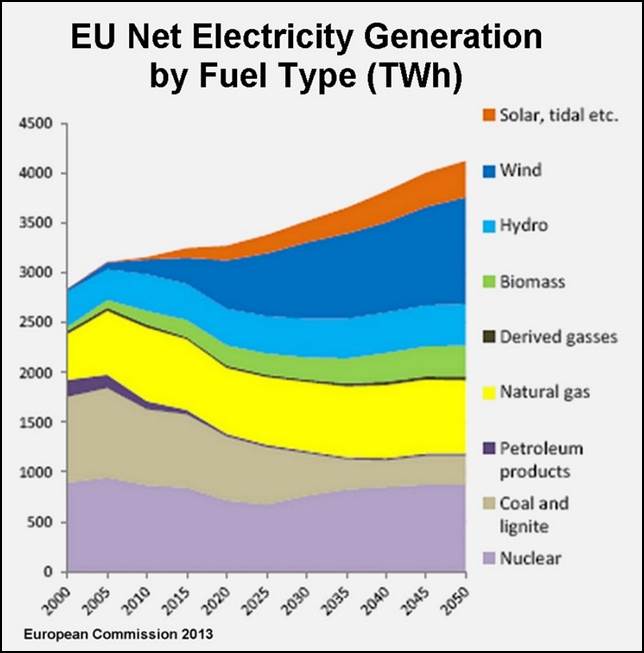 In theory, wind and solar farms ranging from the North Sea to the Alps could offset Germany’s loss of 22.2% nuclear electricity, but only after 4,600 kilometers of grid expansion have been realized. By the beginning of this year, just 322 kilometers had been completed. About 40 kilometers per month of additional transmission would still be necessary by 2022 through regions opposing the ensuing landscape degradation without any local economic benefits.

With regard to carbon capture and storage (CCS), it is not being implemented in Germany – and unlikely to happen in the future.

Until 2020, 17 new coal and lignite (brown coal) plants are scheduled for completion. Eliminating carbon dioxide from flue gases is not planned at any site, however. German policymakers and the general public have rejected CCS, since the required geological injection of pressurized CO2 could endanger local watersheds. Thus, Europe’s chief contributor (20%) of greenhouse gases from 11% of its population has refrained from implementing EU Directive 2009/31/EC on (CCS).

Without nuclear power and CCS, it will not be possible for Germany to maintain CO2 reduction schedules

The Germans may be right to resist CCS but for the wrong reasons. The fact is that CCS-equipped coal-fired power plants will never be an efficient source of CO2-free power. What the advocates of CCS usually neglect to mention is that the reduced efficiency which is the result of implementing CCS processes greatly increases total energy use. In the German case, increasing fossil fuel usage to compensate for nuclear phase-out while equipping all grid power stations with CO2 capture would require more than 200 TWh of supplemental generation for CCS process chains. This additional energy equates to over 100,000 new wind turbines (more than four times the turbine count in 2013) or about twice current hard coal generation. 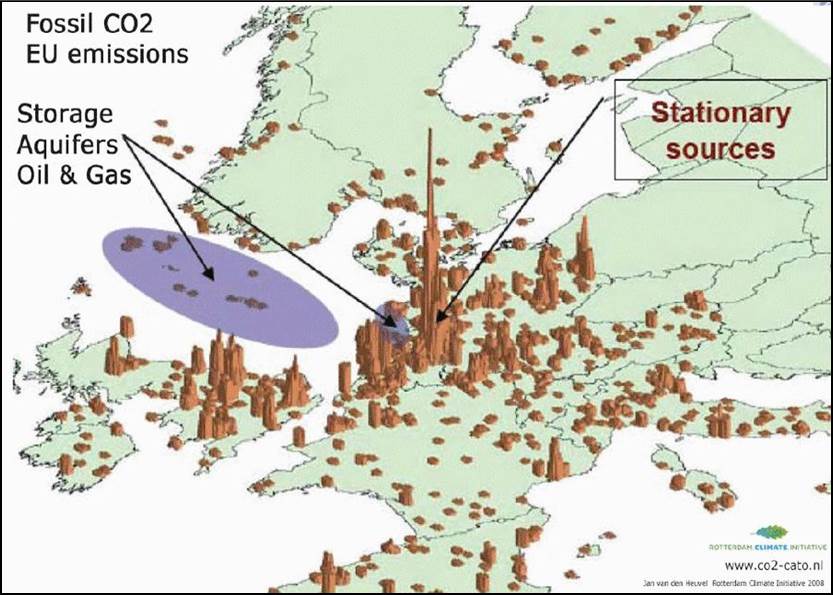 Without nuclear power and CCS, it will not be possible for Germany to maintain CO2 reduction schedules. A 2009 study of the German Energy Agency (dena) has shown that achieving 80% renewable electricity in 2050 can provide just 24% of dependable grid supplies. Despite additional 9% power storage and 25% reduced demand, 60% backup capacity would still be required to compensate for fluctuating solar and wind availability. If that capacity is not provided by nuclear power, fossil fuels will remain indispensible to Germany’s energy infrastructure.

The current market design in Germany only exacerbates problems. Coincidental generation from increasing numbers of solar and wind installations produces frequent conditions of grid oversupply. With the EEG providing guaranteed payments irrespective of demand, the excess power is often sold to foreign markets at reduced rates. German customers do not profit from this situation. On the contrary, they are presented the feed-in bill for surplus electricity used elsewhere

Exports of excess supplies could be reduced by expanding by the transmission networks and constraining conventional generation, but this is also an expensive option with costs likewise borne by customers. Current utility rates for households and small businesses approaching 30 cents (40 US) per kilowatt-hour are among the highest in the world.

Industrial users have to a large extent been exempted from surcharges, but this situation might not last. The EU is investigating whether the exemptions are a form of illegal state aid. The government is under pressure from consumers to make industry pay its fair share of the energy transition. The latest government measures penalize efficient on-site generation. German manufacturers are seriously troubled by this prospect.

Reinhard Ploss, CEO of microchip manufacturer Infineon Technologies, stated at the annual shareholder meeting on February 13 that Germany could become a “museum of industry” if rising electricity prices caused companies to leave the country. Infineon estimates that its energy-related production costs would be nearly 25 million euros lower in Austria and almost 30 million euros less in Malaysia.

What can be done to resolve the dilemmas of the Energiewende?

These developments are not scaled for energy-intensive heavy industries, however. Large cities are also required to procure greater amounts of electricity than local solar and wind resources can provide. Interregional coordination is therefore essential to the future progress of the German energy transition. This need has already been appreciated by a coal power plant conglomerate that is emerging with labor union support to confront the growing market penetration of renewable energies.

Another prospect was provided by a recent initiative when representatives from several German states met with federal officials to discuss a possible reduction of new grid extensions along with diminished offshore wind power development.  Bavaria’s minister for the economy and energy, Ilse Aigner, immediately responded with the proposal for an alternative natural gas power plant near the city of Schweinfurt. The unit would supersede a local 1,345 MW nuclear reactor while also reducing the need for extra-territorial electricity, albeit with greater dependency on Russian gas imports. Estimates indicated that Bavaria would be able to establish a statewide renewable power market with three supplemental peak generating plants of 2,640 MW total backup capacity.

In the meantime, it cannot be ruled out that some German States may argue for delayed phase-out of their nuclear power stations. Clouded references in Bavaria to that possibility have gained currency with widespread protests against grid expansion and potential gas delivery shortages from Eastern Europe.

In any case, a fundamental rethinking appears necessary to maintain the impetus of the Energiewende.

It is worth remembering what has already been accomplished. The original EEG goal envisioned in 2000 of achieving 12.5% renewable electricity supplies in Germany by 2012 has already been exceeded twofold for non-hydro sources. Resulting mass production has significantly lowered equipment costs and promoted global technological deployment. Over half of renewable energy installations in Germany are now being realized below grid parity, rendering the EEG superfluous in the near future.

In short, Germany’s energy transition constitutes a historic contribution to renewable energy development. Rather than being discouraged by regional setbacks, Germany should make every possible effort to make it succeed as a nationally coherent strategy.