Facing flat or declining electricity sales, electric vehicles are a path to growth for power companies. The Edison Electric Institute, the power industry’s main trade group, is calling on utilities to better promote electric cars in order to stimulate demand for electricity and help reverse trends that threaten the long-term viability of some in the industry.

Without a strategy to help connect more vehicles to the grid, utilities will continue to face slow growth and stagnant revenues, warns EEI in a new report. The organization calls electric vehicles a “quadruple win” for power companies looking to boost demand, find new ways to interact with customers, support environmental goals and mandates, and reduce operating costs through electrifying their own fleets.

“The bottom line is that the electric utility industry needs the electrification of the transportation sector to remain viable and sustainable in the long term,” conclude the authors.

Some leading investor-owned utilities have rolled out programs to support charging stations, created pilots to test integration of new vehicle-to-grid technologies and have supported studies to model how lots of electric vehicles would interact with the distribution system. But there hasn’t yet been a strategic, industry-wide effort to support the electrification of transportation as a way to boost demand.

To understand why EEI is now calling for more electric vehicles, consider where the industry is headed. As the chart below illustrates, growth in retail demand has come to a virtual standstill. 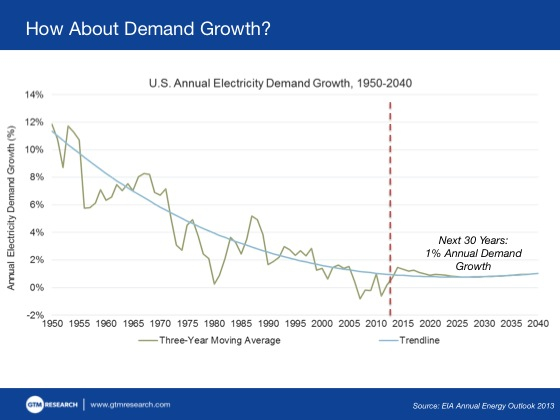 At the same time, the states with the biggest solar PV markets are seeing that technology slow electricity demand growth even further. This is adding additional pressure on utilities (creating borderline disruption in some markets), as third-party developers capture much of the value from developing solar. 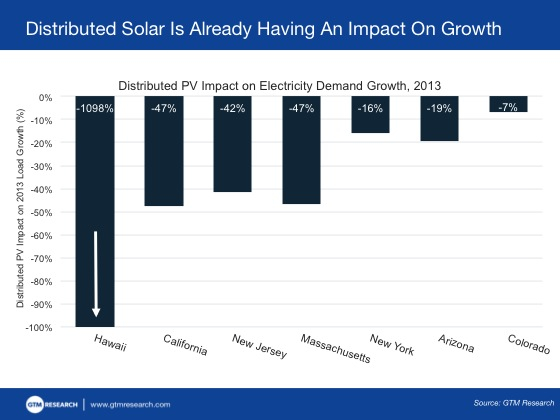 “Stagnant growth, rising costs, and a need for even greater infrastructure investment represent major challenges to the utility industry,” writes EEI. “Today’s electric utilities need a new source of load growth — one that fits within the political, economic and social environment.”

Part of the answer is electric vehicles, which could both grow electricity sales and help balance a future grid made up of much more distributed renewables.

Thus far, utilities have had a conflicted relationship with electric vehicles. Although sales continue to grow, consumer demand has been relatively low compared to initial estimates. That has prevented power companies from investing heavily in charging infrastructure. There are also legitimate concerns about how electric cars and trucks will impact circuits on local grids.

However, the potential upside is enormous. If the two charts above have utilities worried, the chart below should have them excited about the future.

If that’s not enough to get utilities thinking more strategically about electric cars, they should consider the technology’s influence on consumer behavior. According to data compiled by a utility member of EEI, consumers view their local power provider as the second-most trustworthy source of information about electric vehicles, just behind Consumer Reports. Utilities have double the credibility that auto manufacturers and dealers do with consumers.

And a 2010 study from the Electric Power Research Institute found that two-thirds of consumers wanted their utility to provide information on charging station locations and pricing. As the authority on electricity services, utilities have a unique opportunity to steer consumer adoption of EV technology.

In its report, EEI proposes that utilities boost rebate programs for residential and commercial customers, set up new information services for charging infrastructure, create new rate structures for charging, cultivate deeper relationships with auto manufacturers, and purchase more electric vehicles for their own use. The organization is calling on its members to invest 5 percent of their annual fleet purchases in plug-in vehicles to set an example.

“By developing our expertise in vehicle electrification now, we are more likely to be able to dictate our own compliance path,” writes EEI.

Last week, contributor Elias Hinckley wrote a piece for GTM that pondered why utilities have done so little to promote electric cars. He proposed some similar ideas, including the creation of financing options for home-charging stations or partnerships between utilities and manufacturers to develop lending services that could be integrated into a customer’s bill.

Electric vehicles are not yet a significant part of the grid mix. And until utilities figure out how to use their expertise to build demand, they likely won’t be for a long time to come. That, argues EEI, wouldn’t be just a simple missed business opportunity — it could be a deciding factor in the profitability of utilities as they enter an era of declining electricity demand.

How "YieldCos" are changing paradigm of renewables investment

Greg Hunt: The 'extreme left is against electricity'