On Sunday, CleanTechnica broke the news that Germany broke yet another solar power record when the country’s 1.3+ million PV systems turned a sunny summer day into 23.9 GW of solar power at about 1:30 PM. This short breaking news has drawn quite a lot of attention, which is reason enough to follow it up with some in-depth analysis and additional data.

A Word On Solar Power Records

At the time of the recent solar power record on July 7th 2013, Germany had an installed PV capacity of approximately 34 GW (33.87 GW at the end of May + June). It has been the experience of the last few years that this total domestic capacity peaks at about 70–80% even under superb weather conditions, due to the various angles of installation. In other words, since not all systems face south at exactly the same angle, some systems peak at 11:00 AM others at 2:30 PM. 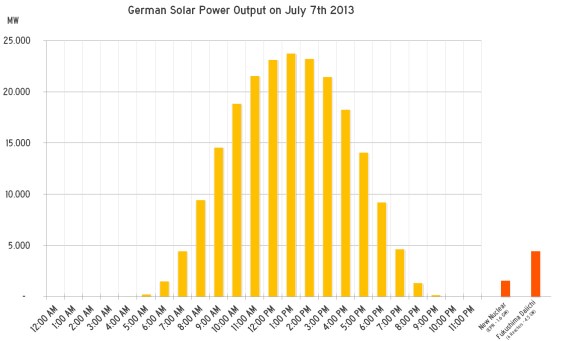 While the “suboptimal” orientation of solar systems isn’t too helpful for reaching (even) higher solar power records, it’s good for grid integration. Since extreme solar power peaks — as cool as they might be — are not really the point, many solar energy experts advocate that future capacities should be installed facing southeast and southwest… instead of simply south. This would increase solar production in the morning and evening hours and provide solar energy more evenly throughout the day – matching production even more with demand peaks.

When looking at the whole German electricity picture on July 7th, it’s important to recognize that it was a Sunday. Many Germans don’t work on Sundays, leaving offices and also almost all stores and shopping centers closed. This cultural aspect obviously affects electricity consumption a lot, leading to approximately 20–30% below weekday demand and a slightly “flatter” load curve. 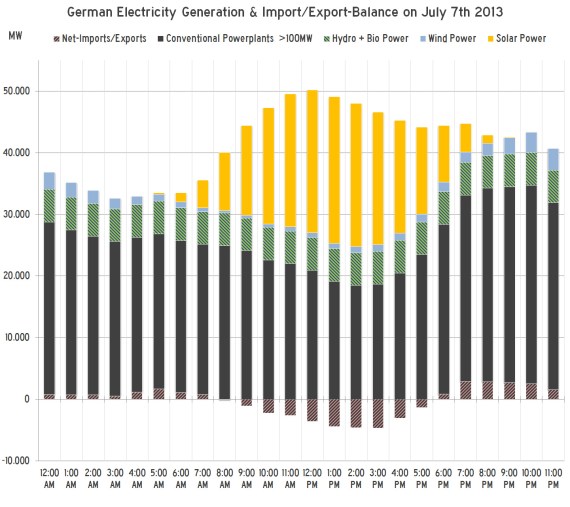 That said, solar power does have a significant impact on the net-generation mix on weekends, as well as on weekdays. On July 7th, solar power pushed the share of renewable energy sources in the electricity generation mix above 50% between 10:00 AM and 4:00 PM — the hours of peak demand. In total, solar energy generated more than 200 GWh in a single day, providing more than 20% of Sunday’s total electricity. 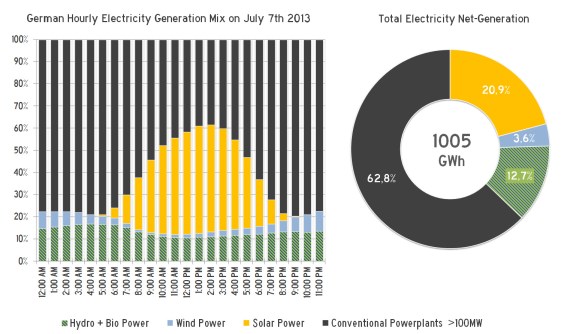 This 20.9% share of solar energy in the total electricity supply was propably the real record. As I mentioned before, this was a low-demand weekend day, but this doesn’t diminish this record in my opinion. It’s more like a window into the weekday summer reality from the year 2016/17 onwards, when the installed solar capacity is projected to pass 50 GW.

← Previous
Lights switch on at Yallourn, but does it deserve a prize?
Next →
5 reasons why Kevin Rudd’s carbon move makes us wince