With the coal price hitting a four year low, the Australian dollar remaining stubbornly above the Reserve Bank of Australia’s preferred range, and renewable technology and cost improvement records being set regularly, the pressure on the Australian coal industry has intensified dramatically.

While many new greenfield coal mine and associated infrastructure projects have been delayed, not all have escaped. We thought it timely to review Australia’s largest coal infrastructure project currently under development – the $3.3 billion Wiggins Island Coal Export Terminal (WICET), and Aurizon’s associated $0.9 billion Wiggins Island Rail Project (WIRP).

Coal analysts like Wood Mackenzie have warned that the port is likely to see operating rates of only 40-60 per cent over 2015-2017, well below the company’s cash breakeven after funding costs. Given the very high construction cost, the port will have to charge well above industry rates, and the take-or-pay contracts turn infrastructure access into a major contingent liability. We see this project as facing the prospect of being financially stranded even before it is commissioned over 2015. 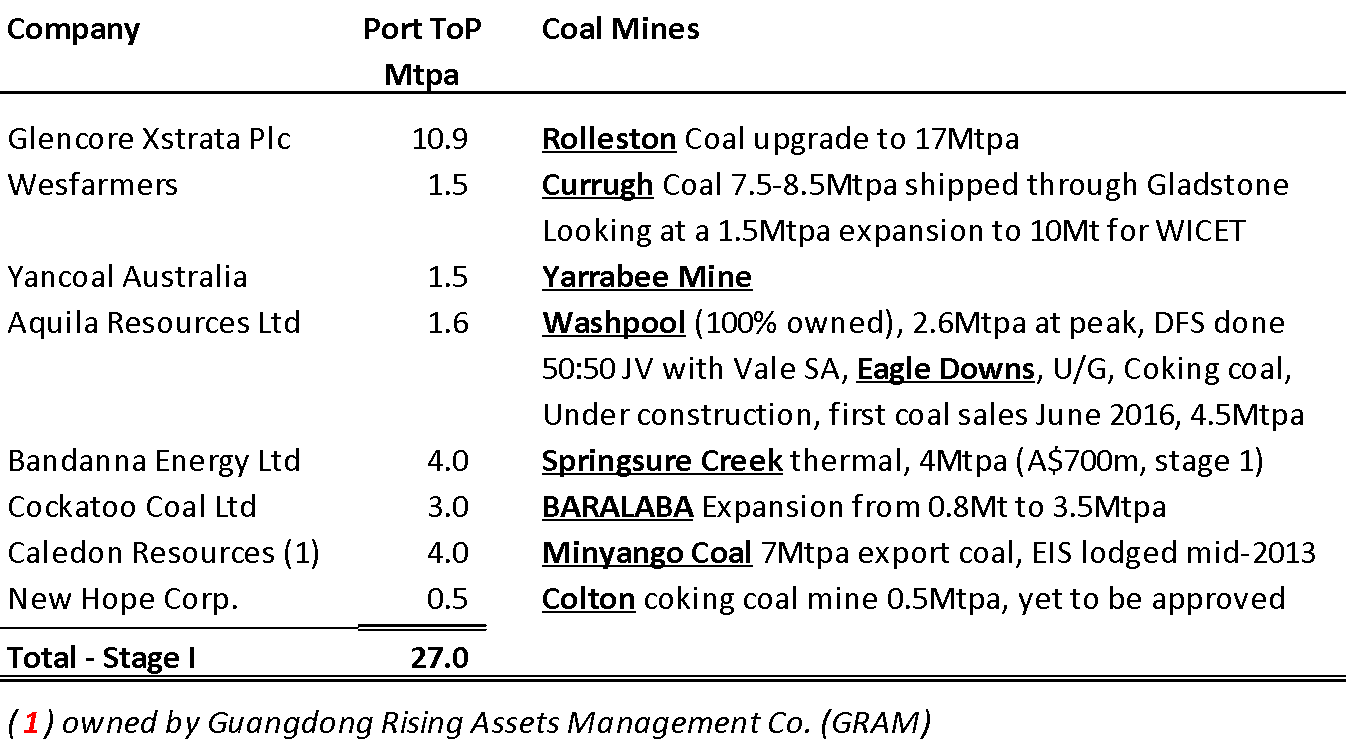 WICET committed to build a greenfields development of a 27Mtpa coal export terminal in Queensland at the height of the coal sector boom of 2011-2012, and has had to compete for construction resources against the massive $70bn LNG build-out of three projects concurrently at Curtis Island.

As a result, while the construction cost of WICET was announced at $2.5bn, but by full commissioning in Dec’2015, the total debt and preference share facilities total up to $3.27bn (although this may not be fully drawn), inclusive of capitalised interest charges.

Per tonne of export capacity, this $3.27bn equates to A$121/t, almost three times the A$44/t port cost that the Adani Group valued the A$2.2bn, 50Mtpa Abbot Point Coal Export Terminal (T1) in Mar’2013. The likely operating cost including financing is therefore likely to be up to twice the Australian coal industry average of A$5-6/t.

Bloomberg reports that WICET will have syndicated debt facilities totaling $3 billion on commencement of operations (see Figure 2 below). The financial syndicate was arranged by ANZ Banking Group. This facility includes a three-year $2.4 billion non-recourse construction loan, a $350 million cost-overrun facility, a $100 million equity bridge loan (since repaid/refinanced), plus $50 million working capital and $100 million letter of credit facilities. In addition to a nominal ordinary equity contribution (<$10,000 in total), WICET has raised preference share capital from its equity investors. The total cumulative preference share equity (capital and interest is repayable Sept’2020) at issue in Sept’2011 was $ 275 million.

With interest bearing instruments used to fund 100 per cent of WICET, the project is excessively geared. The net interest costs are expected to be over $7/t. Depreciation and operating costs add another $4-5/t. Take-or-pays for 100 per cent of the capacity of the port have been signed with the eight shareholders, but even assuming 100 per cent utilisation, the contracted port charges are likely to be $11-12/t; double the Australian industry average of $5-6/t.

In September 2011, WICET announced financial closure, allowing construction to commence on Stage I. Also in September 2011 Aurizon signed a rail agreement with each of the consortium members to underwrite Aurizon’s cost of construction of the WIRP. Rail construction began in March 2012, with time frames aligned to the coal export terminal and related coal mining projects. First railings of coal were initially scheduled for mid-2014 and overall project completion was scheduled for March 2015. In August 2013, Aurizon confirmed the WIRP construction schedule had been delayed by 9 months and as a result the WIRP was expected to be fully commissioned by end CY2015. In February 2014, Aurizon confirmed an agreed, revised delivery timetable with WIRP customers. With the terminal 80% complete as of Feb’2014, first coal shipments are due Oct’2014 to test the export facility.

In October 2013, it was reported that Glencore Xstrata was trying to offload 5Mtpa of its 10.9Mtpa take-or-pay allocation from WICET “due to changed market circumstances”. As of the end of January 2014, there had been no takers of this ToP allocation, and no comment subsequent to this. Glencore’s decision may relate to the delays to the second stage expansion of the Glencore led-Rolleston coal mine from 14Mtpa to 19Mtpa.

The contingent liability of these long term take-or-pay contracts may force some projects to proceed despite otherwise uncommercial risk-return prospects. This is illustrated by the statement in Bandanna Energy’s 2012/13 annual report:

“However, the timing of availability of port and rail capacity dictates the timetable for development of the (mine) project in order to meet our capacity commitments.”

Despite this, many of the mine developments are well behind schedule or even yet to commence construction. As an example, GRAM’s Caledon Resource’s proposed 7Mtpa coal project lodged its Environmental Impact Statement in Jun’2013. As of Apr’2014 the corporate website still reports that:

“The mining lease application has been lodged for the Minyango Project and is currently undergoing environmental impact assessment (EIA)”.

“In particular, a number of producers with allocations to the WICET remain unable to access finance and further delays cannot be ruled out. In this Report, it is assumed that several of the delayed coal projects will be revived late in the forecast period under more favourable Australian dollar prices and local cost structures, but it is not guaranteed.”

Too Many Coal Export Ports in Queensland

As detailed by Laura Eadie in Too Many Ports in a Storm: The risks of Queensland’s Port Duplication, the Australian coal industry has a history of overestimating export expansions and as a result the average Queensland coal export facility has operated at only 63 per cent utilisation rates over 2010-2012. With 38Mtpa of new coal export capacity coming online in 2014-2015, and another 65Mtpa expected from Stage I if the Adani ‘T0’ and GVK ‘T3’ greenfield expansions at Abbot Point proceed, significant excess capacity remains a key risk.

Lend Lease’s decision to pull out of its consortium bid to build the Abbott Point NorthHub AP-X in February 2014 was explained by referencing many competing project proposals. Anglo-American likewise announced it had pulled out of the AP-X development proposal in March 2014.

Excess seaborne coal supply and lower than expected demand growth has seen both the thermal and coking coal spot prices down 45 per cent and 65 per cent respectively from their highs in 2011. The risk of further coal demand disappointments is rising. We note the slowing in GDP growth expectations in China and India, increased focus on air pollution and the associated health risks in both countries, and strong growth in the deployment of renewable energy globally into 2014. BREE recently forecast a further decline in coal prices for the next two to three years.

Rail and port coal export infrastructure are very capital intensive, long life, single purpose projects. We view the risk of writedowns in excess of $1 billion on WICET as a timely warning of on the magnitude of changes emerging in the Australian energy sector.

This report is for information and educational purposes only. It is intended solely as a discussion piece focused on the topic of the Australian energy sector, with respect to investment, policy and regulatory trends and the risk of stranded assets. Under no circumstance is it to be considered as a financial promotion. It is not an offer to sell or a solicitation to buy any investment referred to in this document; nor is it an offer to provide any form of investment service.