India is home to one of the world’s largest coal deposits, but it can’t mine coal fast enough let alone transport it where it needs to go.

“If you want to import coal, gas or petrol, it is freely available. But the problem is that imported coal is 60 to 70 per cent more expensive,” Chairman of the India Planning Commission, Montek Ahluwalia.

Mr. Ahluwalia’s quote says it all: the Indian coal sector is in shambles and imports are a part of the problem, not the solution. Even though India is home to one of the world’s largest coal deposits the country can’t mine coal fast enough let alone transport it where it needs to go. That’s why their enormous coal plant pipeline is largely an illusion. Now a new study from the World Institute for Sustainable Energy (WISE) further underscores the vulnerability of the coal plant pipeline by calling into question the enormous energy security risks coal imports pose. With economic growth slowing down, and clean energy alternatives like wind already cheaper than coal, these new concerns put a big question mark over future growth for the coal sector in India.

Despite the high cost of coal imports until very recently the Indian government was convinced they could heavily rely on them to plug their domestic supply deficit. In fact official government documents placed their imports at somewhere between 35-57 % of total demand by 2032 (see planning commission chart below). To put that in perspective, even though China has broken records for coal imports they still only account for roughly 7% of total coal consumption. 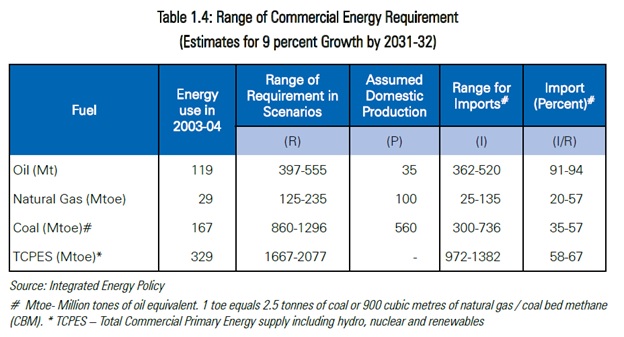 One reason China does hasn’t increased imports to those levels is that it subjects power plants, and the economy they power, to wild price swings that can be exacerbated by the decisions of a small number of exporting nations. In fact, the producer end of the market is so concentrated that price revisions by countries like Indonesia can have severe impacts. Check out what Indonesia’s revision did to the economics of the 4 GW Tata Mundra plant in Gujarat (see below). Now imagine the impact cartel like behavior from these handful of producers would have on Indian energy security at a national scale (‘OCEC’ anyone?). 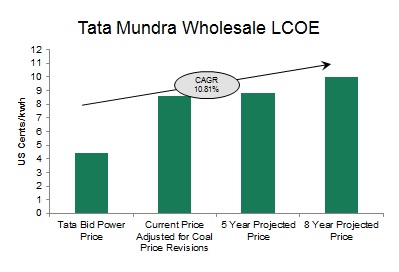 It’s in this context that WISE has outlined its concerns regarding energy security and coal imports. Their most interesting finding is the threat these imports pose to current account deficits. WISE found that a BAU path for all fossil fuel imports (coal, oil, gas) would run a current accounts deficit of 13% of GDP by 2030. The problem is WISE considers 3% sustainable. A worst case scenario tags this bill as high as 39%. At a time when the rupee has fallen precipitously a drain on foreign exchange is indeed a risky proposition.

Clearly the government has a problem on their hands. Luckily WISE has a few suggestions most important of which is to plan for ‘peak coal.’ Not because the resource is running out per se (though it is), but because the current path is simply unsustainable economically. The WISE plan outlines a scenario where the government beings to dramatically ramp down coal plant construction post 2022. This means after the current five year plan (and its proposed 51 GW of new coal) runs its course the next two plans dramatically reduce new build to roughly 13 GW by 2032.

In order to replace that lost capacity and ensure a ‘green transition’ the plan calls for between 346 and 401 GW of new clean energy (nearly the size of the current coal pipeline). That means a dramatic ramp up of solar manufacturing (from 2 GW/year today to 18-25 GW/year by 2020), doubling the current 10 GW of wind manufacturing and combining both with low-cost finance in ‘adequate quantities’. The latter is particularly important given the scarcity of affordable capital for clean energy in India.

Interestingly the transition makes economic sense at today’s prices (there’s your rational market). WISE pegs new coal at 25-29 cents/kwh (including subsidies and externalities) whereas new wind projects are coming in between 7-10 cents while solar is roughly 12 cents.

So there we have it. Our new energy axiom is as follows: clean energy is cheap, coal is expensive. We are in a brave new world and its time policy makers caught on. Because if they don’t, and WISE is right, their fossil fuel import bill just might bankrupt them.

Justin Guay is a campaigner with the Sierra Club. This article first appeared at the Huffington Post. Reproduced with permission of the author.

Dick Smith vs Tim Flannery, and the solar revolution