Renewable energy sources are often hailed as the panacea for a plethora of challenges associated with the use of fossil fuels. Partly for good reasons; while a large-scale utilization of renewables diminishes energy scarcity and lowers various kinds of pollution, their potential to address energy related geopolitical tensions among producer, consumer, and transit countries remains to be seen. Whereas the political implications of the geographic and technological specificities of fossil fuels are well known, it is still highly uncertain what such implications are if we would move to an energy system based on renewable sources.

This poses interesting questions regarding the future of our energy system: what does the development of renewable energy sources and supporting technologies imply for energy-related patterns of cooperation and conflict between producer, consumer, and transit countries? Will a transition to a renewable energy system provide solutions to the geopolitical challenges associated with the use of fossil fuels or merely replace old challenges by new ones?

We aim to investigate these questions by taking the reader on a thought experiment envisaging an energy system that is completely run on renewable sources of energy, keeping all else equal. We basically ask ‘what if renewable energy would power the contemporary world?’ and then explore what political concerns may be expected to arise between energy producer, consumer, and transit countries. This way we hope discus a topic that currently remains underexposed in the energy transition debate while avoiding the deliberations on the likelihood and desirability that tend to accompany discussions of future blueprints yet retaining the possibility to learn from the thought experiment for such futures.

Our thought experiment starts by focusing on the geographical and technical characteristics of renewable sources and accompanying infrastructures and how they might shape a renewable energy system. Five important observations stand out in this regard: 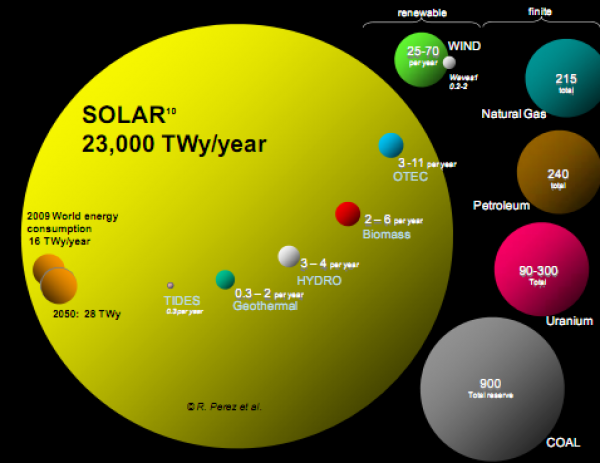 First, when every country has the ability to source energy domestically (at least a strategic part), but some countries are able to harvest energy more efficiently, one may assume that there are a) many (potential) producers in the market; b) production shifts to those countries that can do so most efficiently; and that c) most, if not all, countries face a make or buy decision, i.e. need to choose between cheaper electricity imports from regions with more favourable conditions on the one hand and the security of domestic supply on the other. The sheer possibility of switching producers and/or to domestic production gives consumer countries leverage on the bargaining table when push comes to shove. Put differently, renewable energy markets are likely to be buyer’s markets. Nevertheless, consumer countries will have to deal with two issues: a) while resource scarcity might be out of the way, the availability of solar and wind energy at the right moment is not guaranteed, likely leading to higher electricity prices at times with little wind and sun; and b) sufficient generation and storage capacity becomes a cause for concern as electricity is more difficult to store than fossil fuels.

Second, with electricity as the main energy carrier, energy markets become limited to the size of the grid. The nature of electricity transport implies a tightly integrated infrastructure that physically connects producers and consumers (unlike, for example, oil tankers that traverse open seas). In a renewable energy system without the grid there is little or no energy trade. A few considerations matter in this regard to the size of the grid: a) electricity transport is hindered by the loss of load over large distances; b) the larger the grid, the more energy sources may be included; c) the larger the grid, the more geographical fluctuations in availability of renewable resources can be balanced and exploited; and d) the larger the grid, the more likely that it is vulnerable to disruptions. As a consequence electricity grids tend to span countries and continents, but not the globe. Renewable energy markets are thus expected to exist nationally or regionally. In turn, the geopolitical interdependencies shrink to the size of the grid, even though global markets might exist for the material input and technology necessary to produce electricity from renewable sources.

Third, renewable electricity harbours the possibility of distributed generation and with it new business models that are different from centrally operated systems. Domestically, countries have to decide whether they prefer centrally or decentrally produced electricity and whether to rely on incumbent energy companies and grid operators or to empower households and local communities with their own production and distribution networks (either connected to the grid or not). If the distributed option is chosen, energy markets become locally oriented, likely to involve a mix of private and communal companies.

Finally, the variability of renewable energy generation is likely to result in more volatile electricity prices as compared to fossil fuels and in a need for storage and balancing capacity to create stable energy markets. Solar panels and wind turbines operate at near zero marginal costs. In times of plenty of sun or wind the market is hence flooded with extremely cheap electricity. Of course, the opposite also holds: in times of little sun or wind, electricity is likely to have a much higher price than current coal power plants provide. Moreover, daily demand also knows its ups and downs. To stabilize energy prices balancing capacity is of great value (not just for operational reliability). Options are large-scale storage facilities, investment in renewable sources that are able to deliver at times of peak demand, and great interconnector capacity to link various sources to the same cross-border grid to manage intermittency effects.

Considering the general implications discussed above, it becomes clear that a renewables based energy system could take shape in different ways with varying geopolitical implications. The resulting diverging strategic concerns for producer, consumer, and transit countries can be caught best by exploring two extreme scenarios: a centralized Continental and decentralized National scenario.

A Continental Scenario: control the grid

In this scenario the buy decision and central production and transportation prevail, because considerations of overall cost-efficiency dominate over security of supply. Therefore, energy is produced where it is cheapest and then transported to consumer countries via one interconnected grid using long distance high voltage direct current (HVDC) lines. In the context of Europe, for example, this could imply that Mediterranean solar energy (Spain, Italy, North Africa) and North Sea wind (UK, Netherlands, Germany) are both fed unto the same ‘copperplate’ grid that spans the continent. Visions that resemble such an energy system are the European Roadmap 2050 and Desertec.

The Continental scenario implies a mere shift in dependencies between countries compared to the current fossil fuel based energy system. The categorization according to producer, consumer, and transit countries, often used by geopolitical scholars studying conventional energy, largely remains intact in this scenario, albeit with different players. The most important change is that while minor dependencies exist to those countries that can produce most efficiently, consumer and transit countries have the option to switch to domestic production. Consequently, concerns shift from getting access to foreign resources to controlling the transportation grid and thereby being able to dominate related markets. This results in questions over who owns, manages, and protects the grid. However, the interconnected nature of the grid makes targeted interventions like cutting off a single country largely unworkable. Finally, as renewable electricity will be the main energy carrier, strategic value is no longer found in availability of fuels and the maintenance of strategic reserves but in grid capacity and storage or balancing capacity. Therefore, countries having ample supplies of dispatchable hydropower, standing reserves, or interconnector capacity possibly enjoy (indirect) geopolitical influence over other countries connected to the continental grid.

In the second scenario the make decision prevails as security of supply is valued more than overall cost considerations. Consequently, a predominantly decentralized energy system where countries or even local communities will largely provide in their own energy needs is envisioned. Early signs of such an energy system seem to already be materializing in Germany, for example, where over 50% of new renewable capacity are decentralized energy systems owned by private people, farmers, and energy cooperatives.

The National scenario implies a landslide in energy dependencies and in the way the energy system is organized as compared to the current fossil fuel situation. In this scenario consumer countries become ‘prosumers’ and the need for cross-border energy trade becomes much smaller or non-existent. As a result, the distinction between producing, consuming, and transit states starts to blur. Geopolitical implications become limited to the supply of materials to build energy production capacity. Once such capacity is in place, countries own their energy supply, which drastically reduces strenuous foreign energy relations. Furthermore, possibilities for distributed generation also hint at a business model that could upset the position of incumbent energy companies and the way national grids are operated. Issues of integrating new (decentral) renewable production technologies into existing grids or setting up local energy markets and accompanying regulatory frameworks to facilitate energy trade among local parties and/or communities would arise. In this case energy moves out of the geopolitical realm all together and becomes a ‘mere’ market commodity.

Continental, National, or something in between?

The thought experiment shows us that the potential geopolitical implications of a renewable energy based system depend greatly on which scenario materializes in a possible future, i.e. whether countries will prefer to import cheap renewable energy from abroad or utilize secure domestic sources. When the buy decision prevails, a centralized Continental scenario emerges resulting in a mere shift in energy dependencies from getting access to resources to control over grid operations. If the make decision prevails, a decentralized National scenario emerges that lessens cross-border energy trade and in turn greatly reduces geopolitical tensions. In either scenario electricity will become the dominant energy carrier. Considering the difficulty of storing electricity and the intermittent nature of the most potent renewables, grid infrastructure and storage and balancing capacity become crucial strategic assets in a renewable energy future.

The most likely outcome, of course, is a mix of both scenarios. In the National scenario there would still be opportunities for efficiency gains through cross-border trade of energy and storage and balancing capacity. Moreover, in the Continental scenario countries would still want to limit their dependence by investing in domestic generation and storage capacity. It is highly probable that countries will strike a balance between security of supply and efficiency gains. Vital functions of society could be powered by local energy sources, probably including local storage capacity. Less vital functions could rely on intermittent domestic energy production and foreign trade. The question remains, of course, where that balance should lie and in how far a country is able to create the space for such a decision.

Rick Bosman is Researcher at the Dutch Research Institute for Transitions (DRIFT), Erasmus University Rotterdam. Daniel Scholten is Assistant Professor at the Delft University of Technology, Faculty of Technology, Policy and Management, Section Economics of Infrastructures. Managing Editor of ‘Competition and Regulation in Network Industries.

This article was first published in The Government Gazette [October, 2013, link] and is republished here with kind permission from the authors and the publisher. This article is a shortened version of a conference paper presented at the Politicologenetmaal in Gent, May 30-31st 2013, to read this article, click here.