Ford and SunPower introduce “the first plug-in hybrid that doesn’t need to plug in.” Could they by-pass the grid altogether?

A couple months ago, we asked if electric vehicle services could help an automaker like Ford disrupt the relationship between electric utilities and their customers.

The answer, according to Mike Tinskey, director of Ford’s global electrification division, was probably not. Although Ford is encroaching on traditional utility business by providing new residential energy management services around its C-MAX Energi plug-in hybrid, Tinskey sees the automaker as a “conduit” rather than a direct competitor to power companies.

Unless, of course, Ford bypasses the utility altogether. And that’s exactly what the company now plans to do.

Today, Ford announced its vision to build out new charging infrastructure for its plug-in hybrid vehicles based exclusively on off-grid solar. If rolled out as planned, the automaker says it could cut grid charging of its C-MAX hybrid by up to 75 percent.

“This gives you the ability to fuel the vehicle without having to plug into the grid,” said Ford’s Tinskey in an interview. “We’ve been calling it the first plug-in hybrid that doesn’t need to plug in.”

The system blends together concentrating solar photovoltaics and autonomous driving technology to create an off-grid charging service for Ford customers.

Ford’s new concept plug-in hybrid model, called the C-MAX Solar Energi, will host an array of SunPower’s X21 high-efficiency solar cells on the top. The cells on their own wouldn’t provide enough electricity to recharge the car’s battery in a timely fashion, however. So Ford turned to researchers at Georgia Tech, who developed an acrylic Fresnel lens integrated into a canopy structure that will concentrate the sun onto the cells. 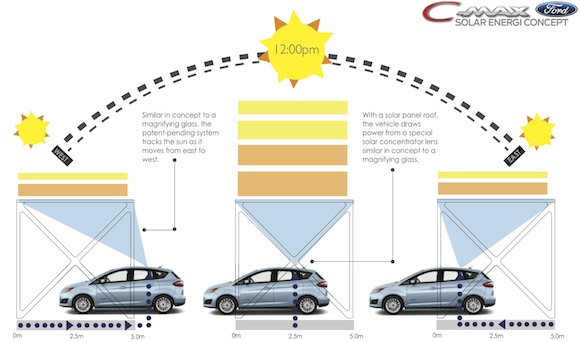 In Ford’s vision, a driver would park the car under the canopy at work or in a public space. Sensors along the car would engage autonomous driving, moving the vehicle beneath the canopy to track the sun. Tinskey said that a six-hour charge could provide 21 miles of solar-based driving.

“The infrastructure is nothing more than Fresnel lenses mounted in a canopy. There’s no motorized complexity. So we’re hopeful this can take off,” said Tinskey.

“Hopeful” is the key word here. The C-MAX Solar Energi is simply a concept model — which means it could take a while for the vehicle to hit commercial production.

Getting into the vehicle-charging sector is certainly not a sure bet, either. Given the number of recent flops and rollout problems among companies trying to build electric vehicle charging networks, it may seem surprising that an automaker like Ford would enthusiastically embrace the charging market. But this model will be easier to implement, said Tinskey.

“There’s been a lot of complexity in grid-based EV charging,” said Tinskey. “The cost and logistics to get Level 2 chargers installed can be tough. But this particular solution is freestanding and requires no grid connectivity.”

With 85,000 hybrids, plug-in hybrids and all-electric sold in 2013, Ford is pursuing new technology partnerships that will encourage more customers to go electric. One year ago, it unveiled the MyEnergi Lifestyle software platform, which connects smart appliances, solar PV and information about electricity rates to help homeowners optimize when and how to charge their vehicle. That product is still in pilot phase as well.

Tinskey said that “technology convergence” is making it possible for Ford and other automakers to dream up entirely new service models for electric vehicles. This solar-powered hybrid is the latest example of the coming trend.

“We’re excited about that trend. The technologies are converging to make this a reality,” said Tinskey.

How Wall Street suddenly fell in love with solar