A new study reveals America’s largest grid operator could exponentially increase the amount of solar and wind electricity on its system, while lowering consumer costs and emissions, without negative effects on reliability.

The PJM Renewable Integration Study, prepared for PJM Interconnection by General Electric Energy Consulting, concludes renewables could provide up to 30% of the electricity across PJM’s 13-state footprint by 2026.

While PJM’s report is great news for the rapid power section decarbonization needed to slow climate change and could outline a path forward for other grids, it’s not without any negative outlook – in every modeled scenario, revenue for conventional generation sources like coal, natural gas, nuclear, or hydropower falls.

30% Renewable Energy With No Reliability Concerns

PJM commissioned the study in 2011 to better understand how the grid would be affected if the renewable energy targets of the states within its footprint were achieved or exceeded. Since PJM’s main concern is maintaining reliable and adequate power supplies and all but two of its member states have some form of renewable targets, it’s a valid concern.

GE Energy and a team of other industry experts modeled ten scenarios, ranging from maintaining the current 2% renewables penetration all the way up to obtaining 30% electricity from wind and solar. The study examined expected power demand growth, wind and solar output, required transmission upgrades, emissions, the value of wind and solar versus conventional baseload, and operational costs, among other factors. 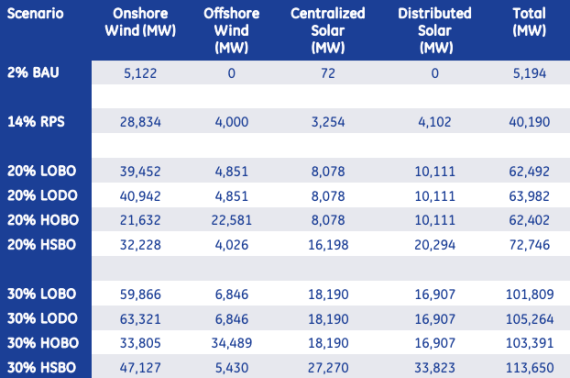 And the results? In every scenario, PJM’s geographic footprint could accommodate a larger percentage of electricity supply from wind and solar without significant reliability issues, so long as adequate transmission expansion (up to $13.7 billion) happens across the system.

Once again, GE’s analysis shows the benefits of integrating renewables over a large geographic area. “Given the large PJM footprint…the impacts of short-term variability in wind and solar production is greatly reduced by aggregation and geographic diversity.” Put another way, if the sun stops shining or the wind stops blowing in one location, other renewables from across the system can fill the gap.

In fact, as more and more renewables were added to the PJM system in various modeling scenarios, their efficiency increased while peak demand fell. Curtailment of renewable generators (“turning off” a power system when it could run) was minimal and resulted from localized congestion instead of overall system constraints. Higher renewable generation also shifted consumer demand, with solar “significantly” reducing net demand during peak demand hours.

But perhaps most promising of all, every scenario created lower consumer costs across the system while cutting emissions. GE’s analysis found PJM fuel costs, variable operations and maintenance costs, and lower locational marginal prices all decline as the amount of renewables increase, with an average production cost savings of around $63 per megawatt-hour.

At the same time, carbon dioxide emissions fall drastically in every modeled scenario, ranging from a low of 12% all the way up to a high of 41% compared to a business-as-usual scenario where PJM maintains the current 2% renewables mix. The report also notes that a $40 per ton carbon tax, if instituted, would push coal generation down even further than modeled in any scenario. 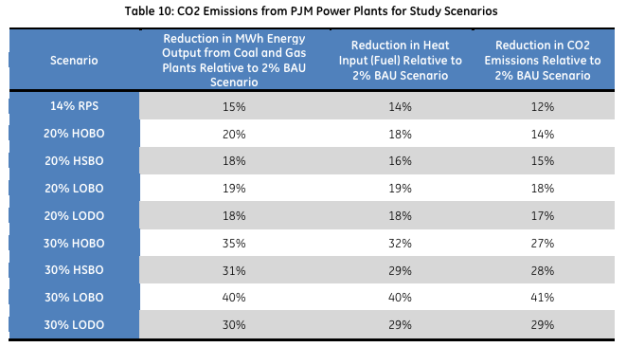 So Is The Future This Bright?

As with any long-term outlook, GE’s analysis is not without potential pitfalls. For instance, many of the PJM scenarios assume offshore wind development in Mid-Atlantic states like Maryland and Virginia along with improvements in renewable forecasting accuracy and growth in energy storage capacity.

But even considering all these challenges, the PJM renewables outlook shows that the transition to a clean energy system isn’t only possible, but it is likely to come with economic and environmental benefits.