Buildings are the largest single source of carbon emissions in America, pouring out 40% of nationwide emissions and up to 75% of all emissions in some cities. Beyond the obvious climate challenge, building emissions also cause local air quality issues, threatening public health.

A large portion of building emissions are due to wasted energy, meaning smarter and more efficient buildings will use less energy and generate fewer emissions – but where can city officials learn which policies work and which ones won’t? Enter the City Energy Project (CEP), an initiative designed to cut emissions and boost economies across the U.S.

The project was launched this week by the Natural Resources Defense Council (NRDC) and Institute for Market Transformation (IMT) in some of America’s largest cities, and if successful, could cut billions from utility bills and remove the emissions equivalent of millions of cars per year. 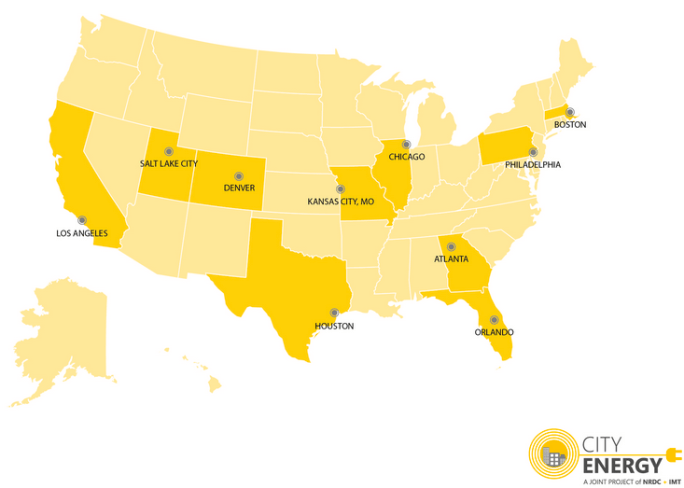 Ten cities will join the CEP effort to start: Atlanta, Boston, Chicago, Denver, Houston, Kansas City, Los Angeles, Orlando, Philadelphia, and Salt Lake City. Under the initiative, each city will work with NRDC and IMT experts to develop their own custom plans to boost energy efficiency in their large buildings, which typically comprise around 50% of any city’s total square footage. In a year, the cities aim to have their plans in place and will track their performance over the following three years to develop case studies.

“We have the skills and technology to make buildings more efficient, but we need a coordinated effort by major cities and the private sector to make it happen,” said Cliff Majersik, IMT’s executive director. While each city’s solutions package will be different, they’ll all adhere to four goals: Promoting efficient building operations, encouraging private investment, helping city governments lead by example, and making building energy performance information public and accessible.

If it works, the environmental results could be significant. The CEP expects to cut a combined total of between 5-7 million tons of carbon emissions every year – equal to taking 1-1.5 million cars off the road, cutting the electricity use of 700,000-1 million American homes, or taking 3-4 large fossil fuel power plants offline.

“When building owners invest in energy efficiency, it improves building performance, saves money, and helps the environment,” said David Pogue, CBRE’s global director of corporate responsibility. “There is an opportunity for the market as a while to make great progress by promoting energy efficiency in the largest buildings across ten of the largest U.S. cities.”

While the energy and environmental benefits of CEP’s efforts are obvious, the initiative also highlights a growing trend making our buildings more efficient – energy benchmarking.

Three of the pilot cities (Boston, Chicago, and Philadelphia) have mandatory energy benchmarking regulations in place where building owners track and publicly report their building’s energy performance so government officials identify what efficiency standards work in their city and help building owners determine if they’re wasting energy compared to other similar buildings.

It’s a logical jump to think sharing best practices would lead to other cities implementing benchmarking initiatives on their own, and those results could be huge. For context, Seattle’s benchmarking program has already identified up to $90 million in potential energy savings after just one year, while New York City’s program could cut emissions by 15% per year.

IMT estimates 48,000 properties and 4.9 billion square feet of building space will come under benchmarking regulations each year, and a national benchmarking policy would save the same amount of energy as removing 3 million cars from the road each year by 2020.

CEP may not be a national program yet, but it’s a start, and enlisting some of America’s most famous mayors in the effort is bound to boost the profile of energy efficiency across the country. “The City Energy Project will bring the significant economic and environmental benefits that energy efficiency has to offer to other cities and accelerate progress by helping them learn from each other’s successes,” said Michael Bloomberg, former New York City mayor.

← Previous
When will Australians finally stop wasting our energy?
Next →
Energy storage market set to ‘explode’